A Tribute to Dean Johnson 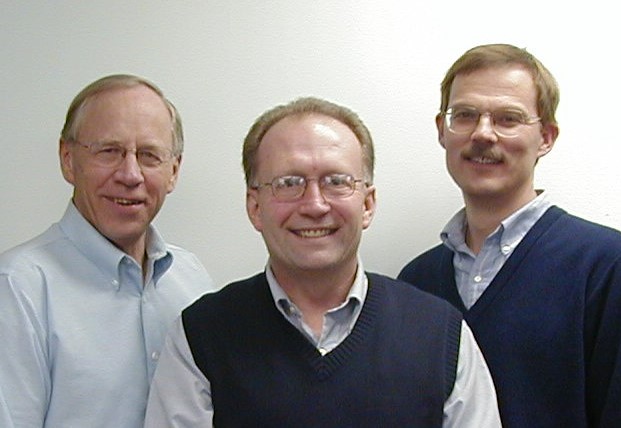 I first got to know Dean Johnson (left) twenty years ago when I was first hired as a part-time ministry assistant with the North Central District of The Evangelical Free Church of America.  From the first he welcomed me as a colleague and co-laborer.  Though I was almost twenty years younger than he, and though I had had no previous formal experience in the EFCA, Dean readily drew me into the circle of fellowship and work with district staff, churches, and pastors.

He thus became a mentor to me.  He was a year away from retirement and was in the midst of an intentional transition to a new district superintendent.  That year—his last and my first—was a time of my learning the basic ropes of district ministry from him.  It was also a time of observing in him a combination of attitudes, traits, and skills that were foundational to much more than district ministry. They landed on me not only as a minister but, more importantly, as a believer, a follower of Jesus, a member of his church.  Dean did not just rub off on me vocationally; he rubbed off on me personally. Here are some of those features of Dean.

Humility.  Dean was truly humble.  He had a sound view of himself.  He was not arrogant or unteachable.  He did not force his way on others.  He took to heart the truths of Scripture about God and human beings and sin and a life of holiness.  He lived with an honest view of his own weaknesses, was quick to seek forgiveness when necessary, did not feel a need to promote himself.

God-centeredness.  The primary reason, I believe, that Dean was truly humble is that he had a God-centered view of life and ministry.  He knew Jesus Christ personally and worshiped him authentically.  He did not just know about God; he knew God and took joy in God and invited others to enter into that intimate knowledge and joy.  This was the axis around which his life turned.

Scripture.  Dean was not just Biblically correct, Biblically informed, Biblically knowledgeable.  He lived and moved in the Scriptures and let them soak into his life.  He lived under the Scriptures, wanting them to control him, not the other way around.  He engaged the truth intellectually, affectively, and behaviorally.  He was a lifelong student of the Word, constantly posing questions, seeking answers, writing down insights, and eager to engage in Biblical interaction with others for the purpose of true holiness.

Sympathy.  Dean loved the church and the believers who make up the church.  He cared about people.  He sympathized with their pain, their struggles, their problems and challenges.  When he addressed church issues, small or large, pleasant or painful, it was with a spirit of love and sympathy.

Courage.  Dean did not quail from addressing difficult issues in churches.  He was gentle and kind, but forthright and determined to help people see and walk in Christ’s way.

Good judgment.  Dean was sensible.  He was not reactive or defensive.  He did not let inner issues or circumstantial dynamics affect his decisions and course of action adversely.  He considered various factors when he made decisions.  He was sensitive to relational dynamics, organizational dynamics, and longer-range perspective.  He understood policy and exceptions.  He did not minimize nor over-crucialize.  He had common sense informed by his overall maturity.  It made quite an impression on me.

Idealism and realism.  Dean engaged in a lot of thought and planning on the level of philosophy and values and objectives and principles and strategies.  He saw the design of Christ’s church in Scripture and he loved what he saw.  He longed for that ideal to be lived out by the Free Churches whom he served.  At the same time, he was thoroughly realistic.  He was patient with weaknesses and failures.  He persevered amid distortions of the church, mistreatment of the church, misbehavior by the church, and the obscuring of the glory of Christ in the church.  He always knew it was Christ’s church, not his.  He bowed before the mysterious sovereignty of Christ in allowing his bride to mishandled and dirtied, and he trusted the mysterious sovereignty of Christ to use these grievous realities in his sanctifying purposes.  At times he sorrowed, was angry, shook his head, but he kept on faithfully serving in the trenches of reality while guided by the never-failing beauty of Christ’s ideals.

Function and form.  Dean understood and valued the distinction between the what that Scripture commands, and the how of putting it into practice.  The former (function) is non-negotiable; the latter (form) is highly flexible.  Keeping this distinction in mind allowed Dean to bore in on what was truly important and to give lots of latitude in what was flexible.  In fact, one of the things I appreciated most about Dean was that he appreciated and supported both traditional and non-traditional forms of ministry and church life.  He did not deconstruct the former and he did not resist the latter.  He believed Christ was present through his Holy Spirit in both “lanes of the highway.”  He was free to honor the familiar and to venture into the unfamiliar.  This made a lasting impression on me.

Simplicity.  For all of the complicated situations Dean had to deal with as district superintendent; for all his diverse skills in carrying out that ministry; for all his intricate engaging with Scripture and its implications—Dean struck me as a wonderfully simple man.  Simple as in not needing a lot; as in being content with a few basic realities of life; as in not being hard to get to know or understand; as in not being distracted and pushed in all kinds of directions.  There was an established purpose and joy and love about Dean that were unalloyed and easily shared with those who wanted to get in on it.  It was my pleasure and blessing to be a beneficiary of that.

These features (and more) of Dean Johnson, by God’s grace, had wide-ranging effects, bore wide-ranging fruit.  It was my privilege to see and experience that fruit for the next twenty years in the North Central District.  Dean built a foundation, set a tone, shaped a trajectory, cultivated values that lasted far beyond his tenure.  They continue today to influence in powerful ways the pastors, churches, and staff of the NCD.  They have marked me, and I am grateful to God for the life of Dean Johnson.

You have successfully subscribed!